From August 28th until September 2nd, in the village of Kronenberg in the Netherlands, world championships in horse carriage driving took place. Bartłomiej Kwiatek, representing the GLINKOWSKI team, won the title of The World Champion. It is the greatest success of Polish carriage driving in the “single” category. In total four teams from Poland took part in the competition. Poland won Bronze Medal in World Team Championships.

82 teams from 23 countries took part in the competition. Hosts had the strongest representation (14 teams), then came Germany (10 teams) and the countries which were represented by only one team are Australia, Lithuania and Ireland. Four Polish teams qualified to the competition: Sebastian Bogacz, Tomasz Jankowiak, Katarzyna Kurys and Bartłomiej Kwiatek.

Bartłomiej Kwiatek was the driver who ruled the entire competition. In Speider Light carriages [dressage, agility] and Double Sport 350 [marathon] produced by the GLINKOWSKI brand, he won the World Champion title, achieving the greatest success of Polish carriage driving in the “single” category. Daniel Kłosowki was the groom of the current World Champion, and SONET was the stallion harnessed in the carriages. 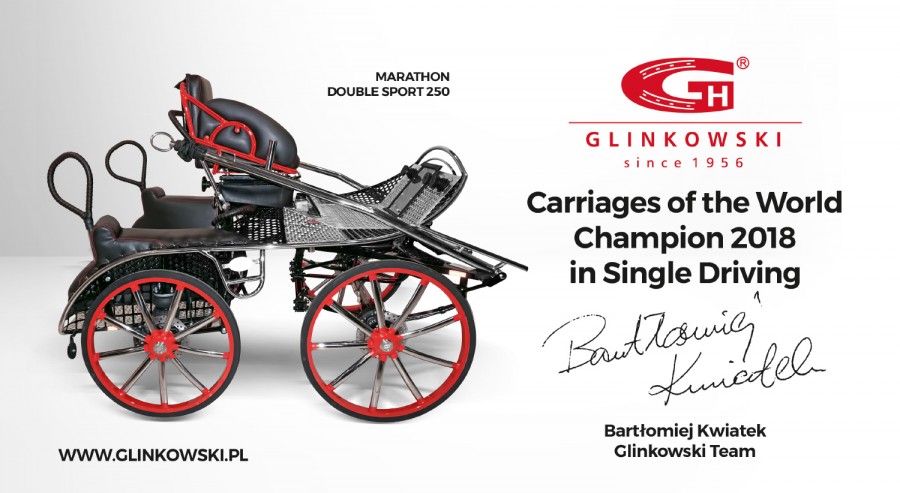 Competition for the gold medal was fierce and very exciting. After dressage, Bartłomiej Kwiatek took the fifth position. On the second competition day, by winning the second place in the marathon, he improved his situation, finding himself on the first place. Everything was resolved on the third day, during the agility contest.

In this last competition, the drivers begin according to the rule: from the one with the biggest number of penalty points to the one who has collected the least of them. While beginning the competition Bartłomiej Kwiatek knew that Saskia Siebers from the Netherlands was his only opponent in the struggle for gold.

Losing 0.6 points meant for Kwiatek that he could not make any mistake in the agility part, consisting of as many as 21 gates, and the only accepted exceeding of the regular ride time was… 1 second.

“I felt confident about Sonet and that I have a great and maneuverable carriage”, Kwiatek recalls. “I knew that the result would be good, but I tried not to think what I need to win the gold. I just focused on the best possible ride”, he adds.

The member of GLINKOWSKI team stood the pressure and finished the competition not only without making any mistake but also respecting the regular time. After the final summary of results, it turned out that Bartłomiej Kwiatek got in total 139.27 penalty points and Saska Siebers from the Netherlands, who came second in the classification, 139.86, so there was only a slight difference. 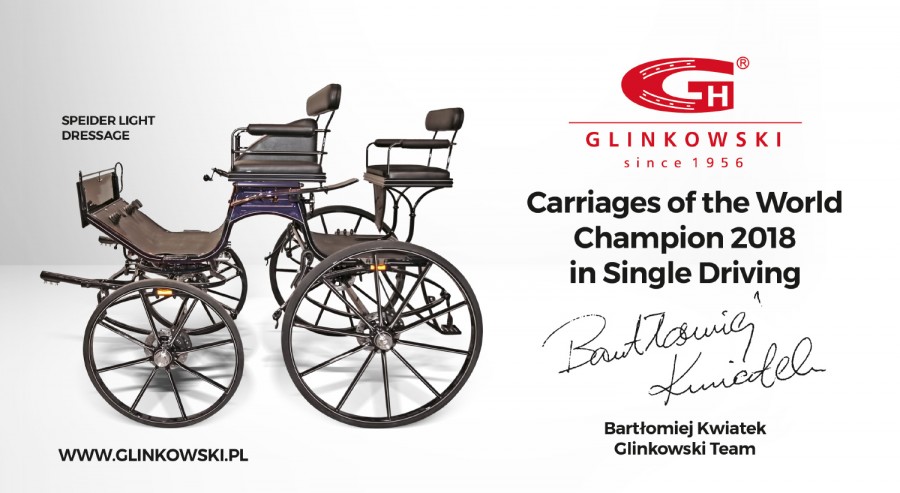 Gold medal in World Championships also constitutes the success of GLINKOWSKI brand, which has been manufacturing horse carriages since 1956. In its facility located in Sikorzyn near Gostyń, in the South-Western part of Poland, over 1500 carriages are manufactured per year. The brand, famous all over the world, specializes in the production of sports horse carriages and the gold medal won constitutes one of numerous medals of World Championships and the Championships of Poland that the drivers representing the company have won within the last few years.

“High position of our brand on the market of sports horse carriages is confirmed by the fact that 25-30% of drivers competing in Kronenberg did it in our carriages”, emphasizes Hubert Glinkowski, co-owner of the facility. “Sebastian Bogacz was another Polish driver in our Double Sport 250 carriage. We are satisfied with the results of the competition”, he adds.