Stan van Eijk with the silver and bronze medals at the World Driving Championships for Pairs!

A few weeks ago, the FEI World Driving Championship of Pairs took place in Drebkau, Germany. The title of Team Vice-World Champion went to the Dutch national team, composed of: Geert Dijkhof, Antonie Harmsel and Stan van Eijk, who competed on the new "Marathon Maestro 2" horse-drawn carriage made by GLINKOWSKI. In the individual classification Stan van Eijk came in third. Five teams from Poland took part in the competition. In the team competition the Polish national team took 9th place.

Almost exactly a year after Bartłomiej Kwiatek (GLINKOWSKI TEAM) won the title of individual world champion in single-horse driving (read more - click), we can boast of another championship rank success. 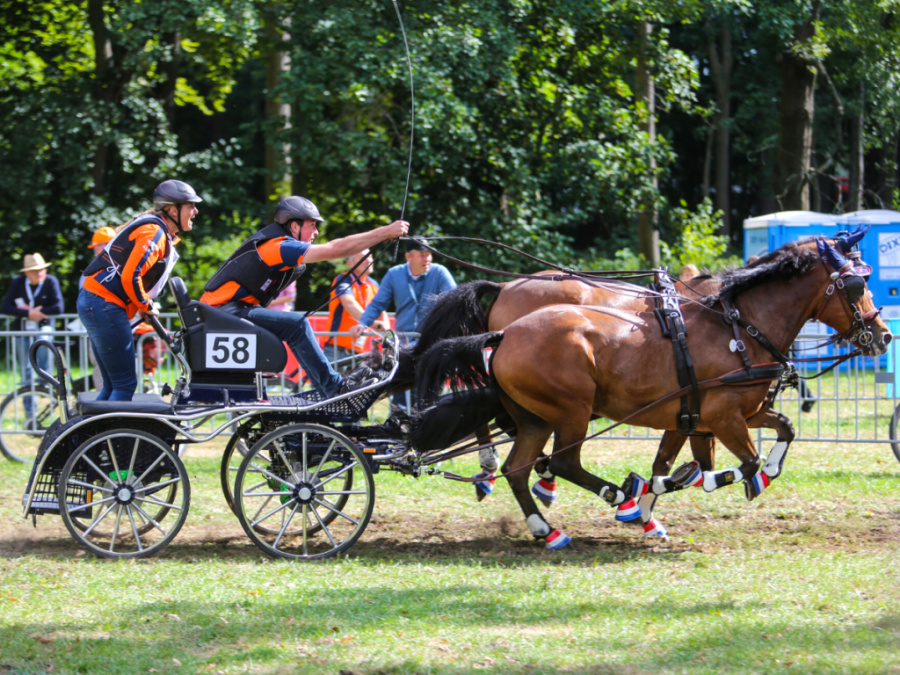 During the World Driving Championship of Pairs in Drebkau Stan van Eijk (Netherlands) riding on the "Marathon Maestro 2" horse-drawn carriage won a bronze medal at the individual World Championships. This is not the only success of this excellent Dutch driver. Together with his colleagues (Geert Dijkhof and Antonie Harmsel) he won the title of Team Vice-World Champion for the Netherlands..

- “Marathon Maestro 2” carriage is another example of a completely individualized construction of a horse-drawn carriage, prepared following Stan's precise expectations," emphasized Hubert Glinkowski, co-owner of the GLINKOWSKI brand.- As a horse-drawn carriage manufacturer, we feel immense pride and at the same time we are extremely happy with Stan's individual achievements - he adds.

It was this great result in the marathon, in which Stan van Eijk took 3rd place, that contributed to both titles. After the first dressage competition, the competitor was only in 15th place, and in competition with obstacles he took 11th place.

Over 80 sports teams from around the world took part in the competition, including 5 from Poland. The Individual World Champion, just like in 2017, went to Hungarian Martin Hӧlle. The same situation occurred in team competition, where the Hungarian national team (Martin Hölle, József Dobrovitz, Kristóf Osztertág) again gave no chance to the rivals. The Individual World Champion title want to Sandro Koalick, Germany. The Germans also won the bronze medal in team competition (Sandro Koalick, Arndt Lörcher, Lars Schwitte).

It is worth emphasizing that Sebastian Bogacz and Jacek Kozłowski also competed on GLINKOWSKI carriages. Horse-drawn carriages signed with our brand could also be seen in the Hungarian, Czech, German and Danish teams.

- We are always happy to work with professional drivers. They are focused on results and thus show greater readiness to implement technological innovations - says Hubert Glinkowski, co-owner of the GLINKOWSKI brand. - Competitors, in turn, value our flexibility in meeting individual expectations, thanks to which they receive carriages with exceptional sports qualities and design, and this gives them confidence during the competition - he adds.

2020 is an opportunity for the GLINKOWSKI brand for further successes. This year, the title of the Individual World Champion in single horse-drawn carriages will be defended by Bartłomiej Kwiatek, who we mentioned earlier (read more - click).